Journalists have long been subjected to several Israeli violations including deliberate killing, arbitrary measures, closure of media institutions and prevention of coverage, arrest, summons and house arrest, which is mainly practised against journalists in occupied Jerusalem.

The Israeli attacks on media workers have notably and systematically intensified over the past four years, including shooting, killing, tear gas and sound bombs fire, beating and dragging. These documented violations left many journalists injured, with some of them suffered limb loss and facial deformities.

During its aggression on Gaza Strip in May 2021, Israeli occupation targeted 23 media institutions headquarters including Al Jazeera Network and the Associated Press.

The ongoing Israeli violations against journalists and media workers came in flagrant violation of international humanitarian law and conventions. Despite the United Nations’ frequent appeals to hold Israel responsible in protecting journalists and prosecuting those responsible for the crimes against Palestinian journalists, nothing has been achieved yet.

In this regard, Global Rights Watch (GRW) invites you to attend an online panel to shed light on the Israeli criminal practices against journalists and media workers.

Please join us at the bellow Zoom link:

Seminar on Local Elections in Palestine 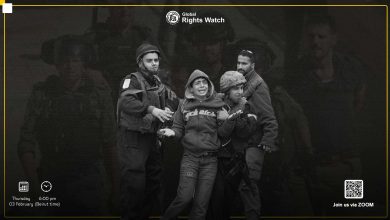 Seminar: the Pegasus programme and its role in the violation of human rights.